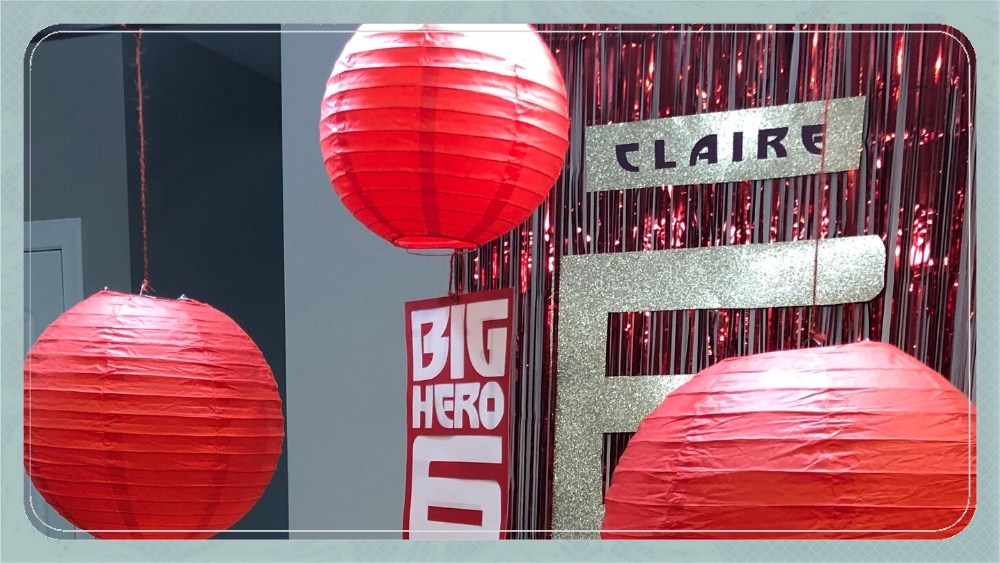 My family is big on themed parties, and we love to throw fun but affordable ones.

My daughter’s top two Disney movies are The Little Mermaid and Big Hero 6, and she wanted them to be party themes. So we threw a Little Mermaid party for her last year, and saved the Big Hero 6 theme for when she turned 6.

Today, I’d love to share what we did for her Big Hero 6 Party!

*This post contains a few Amazon affiliate links. We may get a small commission based on your purchases at no extra cost to you.

I made about 80% of the decorations with my Cricut Explore. (Also, this is not a sponsored post, though it may sound like it. I just really love this machine!)

For the table backdrop, I ordered this fun red fringe foil curtain. It was so sparkly and festive! The only downside was that it was superrrrr long. My husband had to trim the bottom so people wouldn’t trip, but it was an easy fix!

My husband also drew a huge 6 out of glitter gold poster board, and then I glued my daughter’s name to a scrap piece from that. (I used free Big Hero 6 font I found online for all the decorations that had words.) I made Gogo discs from yellow paper to cover up the tape we used to hang the red fringe curtain.

To capture the Asian feel of San Fransokyo, we hung red paper lanterns over the island.

I made a Big Hero 6 logo sign with my Cricut and cardstock to hang underneath the center lantern. I loved how it turned out!

I used the drawing feature on the Cricut to draw the main characters of Big Hero 6. I was so excited to use my Cricut pens I got for Christmas!

I put these, along with the character names, on the back door.

I strung balloons and streamers in the archway, along with a little Baymax head I made from a pizza cardboard circle.

I ordered this Big Hero 6 tablecloth to go on the island. I loved that it wasn’t too matchy-matchy with the rest of the decorations, but still cohesive.

For kid parties, I really like keeping food easy and simple and so I can put more effort into other elements. (For adult parties, I like to go fancier on the food.)

Baymax pizzas are easy to make and are surprisingly addicting! I used pre-made biscuit dough and pulled each biscuit dough circle in half to use as crust. I spread pizza sauce and cheese on top. I used mini pepperonis as Baymax’s eyes, and used kitchen scissors to slice pepperonis into strips to go between the eyes. Bake at 375 degrees until crusts are golden brown and the cheese is bubbly. For my oven, this took about 13 minutes. EASY, easy.

We went with cupcakes again for a treat, with “Gogo” yellow frosting and these cute rings I found on Amazon. I put Big Hero 6 figurines around the cupcake stand for a little added decoration.

For the drink, I used Blue Hawaiian punch and put a picture of Wasabi’s car at the bottom of the dispenser. I also added a picture of Baymax rescuing the five college students from the watery crash, like in the movie.

As the party guests arrived, the guest drew themselves as super heroes, and we hung the pictures in The Gallery of Heroes (a.k.a. my hallway). Look how cute and hilarious these heroes are!

For the next activity, I made a Yokai out of a large black trash bag, a black balloon, and a paper mask. I duct-taped two velcro catchers onto the body and put velcro onto some ball pit balls (Second target not shown in first picure). The kids pretended to be like Honey Lemon and had to throw the balls onto the targets. We did one round with stationary targets, and a challenge round in which my husband moved the Yokai around to make things a little more difficult. The kids had a blast!

As you can see, my Yokai head popped right before the game started. We still had fun with it!

My daughter wanted a pinata. But it was 25 bucks just to buy a white circle pinata that wasn’t even finished. So I followed the instructions from instructables.com to make my own pinata! It took me about two hours and a couple of bucks. It is obviously not perfect, but it was great for something that was made to be broken anyway!

I made these little bags for the kids to put their pinata candy in. I trimmed brown paper bags to make them smaller and then cut out a Baymax face and the kids’ names with my Cricut.

Oh yeah, and I made a little Baymax hat for my son! Black felt and glue on a white baby beanie.

Hope these ideas inspired you for your own Big Hero 6 party!

For more birthday ideas, see our other parties and celebration ideas posts!

Pin for later use!

I recently had the privilege of throwing a baby shower for my sister-in-law, Cami. Choosing a theme was the easy…

And I try not to toot my own horn, (and really this is my mom’s horn), but this tortellini is…

I’ve been a ZYIA Active rep for three years and a half now and I absolutely LOVE it! I live…